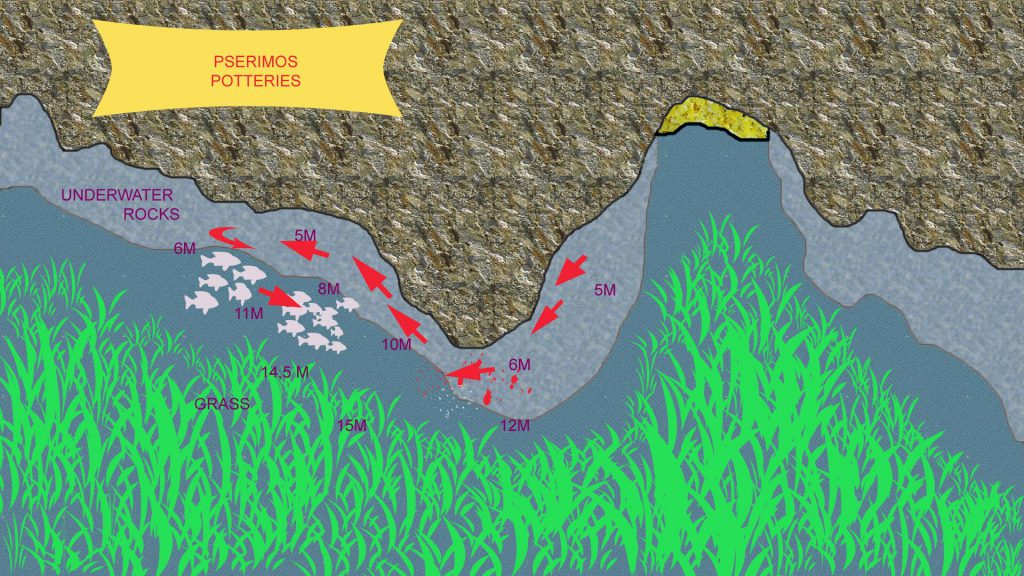 A great reef with an added bonus, it is a 12m deep reef covered in history. The history being in the form of hundreds of ancient Greek amphoras! Probably once containing wine or olive oil. How these amphoras came to be scattered over the sea bed is a mystery lost in time maybe once the site of ancient Greek merchant ship wreck, who knows? Underneath only one rock ledge on the reef you will find the very shy red and white stripped squirrel fish. Please note that the removal and the photography of the amphorae is strictly forbidden by the Greek laws. The Potteries is a very easy dive and is best dived to a maximum depth of 12m,after this depth the reef gives way to sand so stay shallow and look out for octopus, and scorpion fish hiding in the rocks. You can also expect to see various reef fish including many types of shoaling sea bream and colorful wrasse. The Potteries is the closest site to a nearby fish farm and so because of this can sometimes throw up a few surprises. 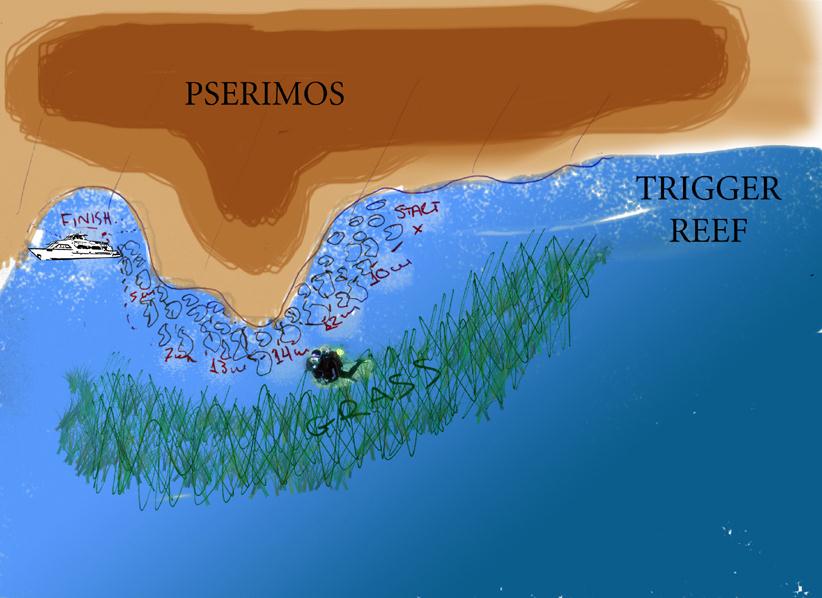 The zodiac takes you from the Apollon to the start of Trigger reef. A relaxing 45 minute swim takes you back. Similar to the Potteries the reef meets the sand at about 14m so there is no reason to dive deeper. Most of the summer you are guaranteed to find the beautiful nudibranch, flabelina affinis, bright purple coloured and the cratena peregrina white body with orange, purple or dark blue tentacles. They feed on the soft coral moss and is the perfect subject for macro photography.
Trigger reef gets its name from the regular sightings of trigger fish (Balistes Carolinensis), a rare fish from red sea, so keep an eye out. You can also expect to see octopus, moray eel and the common reef fish of the Med. 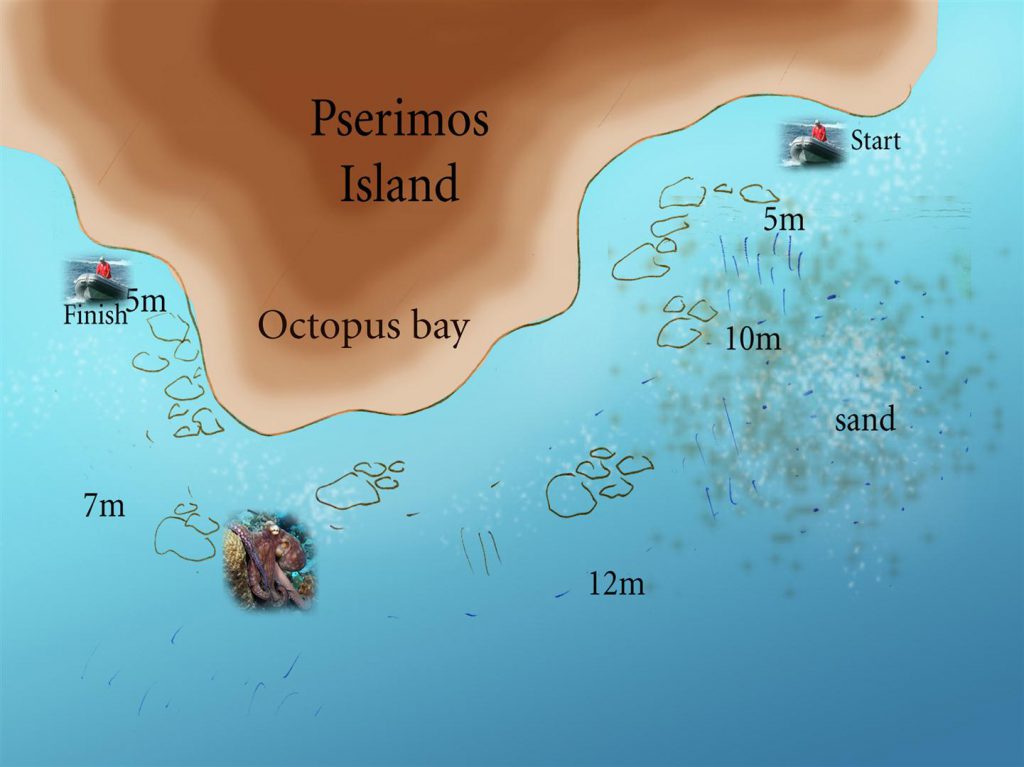 A reef named after the many octopuses they have been spotted on the reef on more than one occasion.
The RIB takes you from the Apollon to the start of Octopus bay. A relaxing 45 minute swim takes you back to starting point of the trigger reef dive site.
The reef can be described as a gently sloping wall to a maximum depth of around 16m.
It is a great place for spotting the beautiful coloured nudibranch sea slugs and also the giant Mediterranean black and white sea snail. 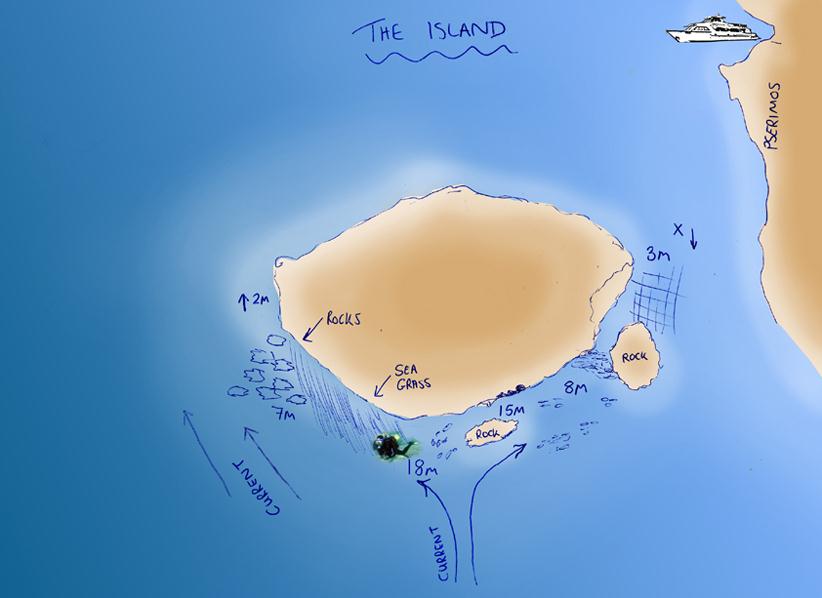 Isolated in the mouth of the bay is the Island. A short trip by zodiac enables you to drift dive down the sheltered side of the Island that faces Turkey. The divers are drop off by zodiac, the current can be nothing to moderate. This dive may be done at any depth up to 20m for at this depth the Island gives way to the Neptune grass, giving you a very good chance to spot the very shy Mediterranean pipe fish.
Swim with the Island on your right side through shoals of black damsel fish and silver picarel. Follow the rock line up to around 13m and you will come across some small caves where morays like to hide during the day waiting for darkness to fall and hunting time to begin! There are huge schools of pickerel swimming out in the blue and as the divers reach the eastern part of the island they will find some very interesting rock formations covered in orange and brown sponges at around 5m perfect for a safety stop. Then a short ascent to the waiting zodiac.
Another site, where you can expect to find octopus, moray eel, bream, wrasse, scorpion fish and a different kind of nudibranch discodoris atromaculata.
Due to the unpredictably of weather and changing sea conditions scheduled dive sites may change on the day. This is at the discretion of our captain. 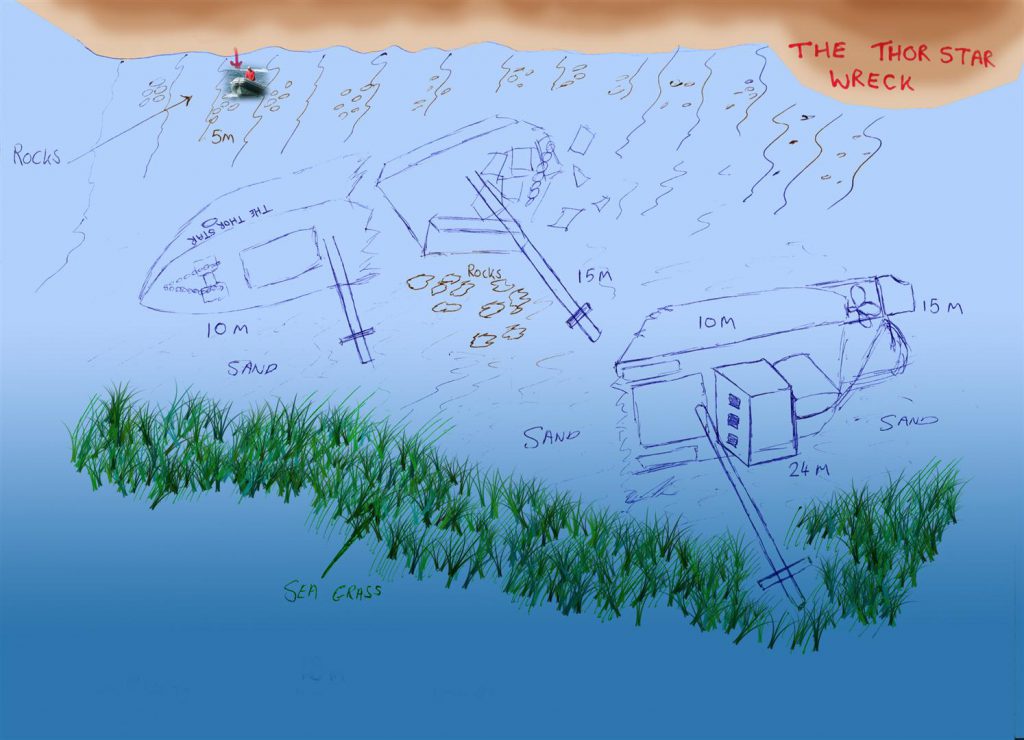 Thor Star is a steel boat with total length of 73.51 meters. For years, Thor Star was covering with mystery. Thanks to the efforts of Bart Siliakus and Martin Allen this mystery is revealed. She was built on 1965 in Atlas Werke AG – Bremen and her original name was Seeadler. On the 26 of January 1997 was abandoned at the southeast side of Pserimos. Five years later she sunk. Now she lies in three pieces at the bottom of the Aegean Sea. The first section, the bow lies at a depth of 5 meters, the second part starts at the depth of 5 m and has a maximum depth of 12m. Following the ships loading crane will lead you out to the stern the third section of the wreck, where you can explore the ship’s bridge and propeller. The stern lies at maximum depth of 24m making the Thor star a suitable wreck for experienced wreck divers and the perfect place to get more qualified, with the supper structure still intact the wreck attracts more big fish than any of the sites around like Jacks, Bonitos, Snappers and sometimes Tunas. Lots of damsel fish, sea breams, picarels, scorpion fish and the amazing nudibranch thuridilla hopei.
For more information and the official record for the “Thor Star” click here Source .
Due to the unpredictably of weather and changing sea conditions scheduled dive sites may change on the day. This is at the discretion of our captain. 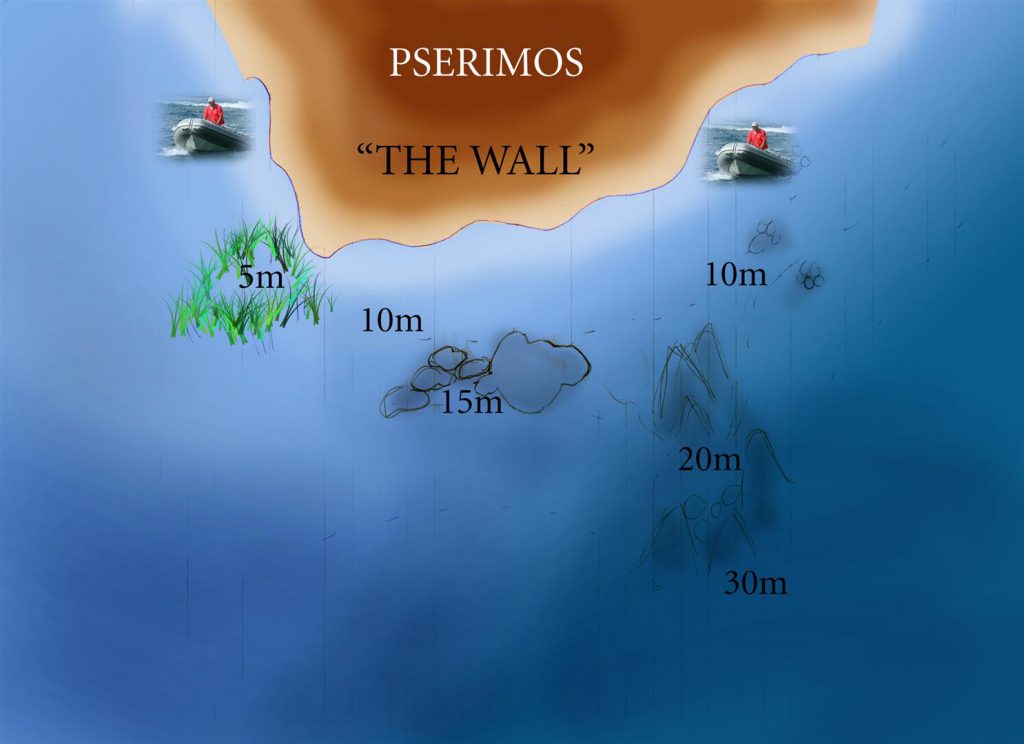 A drift dive made by zodiac drop off and pick up. The dive starts just past a towering vertical cliff face rising up straight out of the sea. As you descend look out for octopus hiding in the cracks of the wall. The wall descends down and levels out to an out cropping pointing north at 18m the out cropping then drops off to a depth of around 50 meters. Follow around the out cropping towards the east at about 20m. There can sometimes be a fair current if there is just go with it. Lobster and pope’s umbrella sea slugs can be spotted along here. Going a little further you will find a huge sphere shape bolder looking rather out off place among the other jagged rocks peacock wrasse are frequent around here, from here you reach a small cave the walls of the cave are covered in orange soft coral and inside you will find a lone fan mussel of a fair size. The dive then shallows up from 10 meters, following the now smooth rock bottom to an octopus spotting safety stop.
Due to the unpredictably of weather and changing sea conditions scheduled dive sites may change on the day. This is at the discretion of our captain. 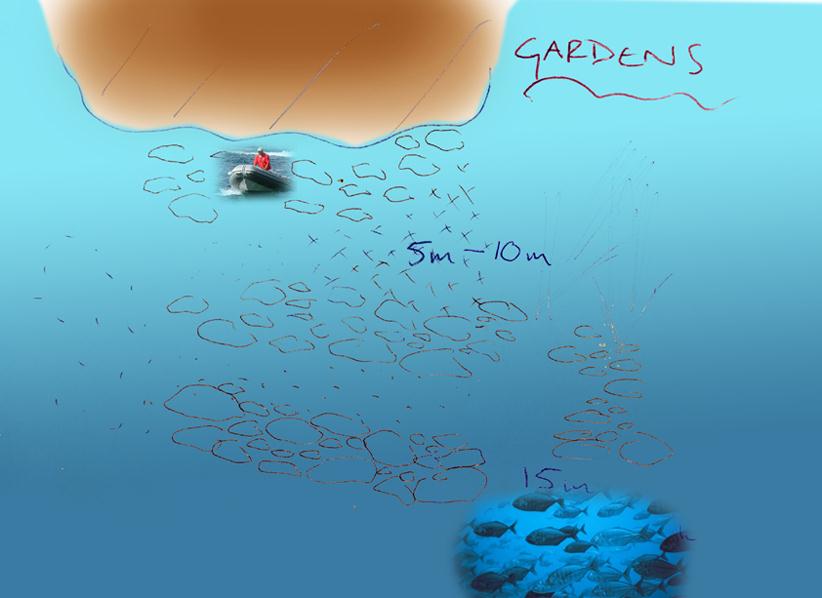 A must for photographers! Named the gardens because they resemble an English country garden, sandy paths dividing patches of reef. This is a shallow dive with a maximum depth of 12 meters, but with the abundant marine fauna and the sun shining through the crystal clear waters bringing the colours to life, it is easy to use up a roll of film or fill a memory card! Here there are oysters and Noah’s ark clinging to the rocks, sponge and soft coral on which you will find pink, blue, and purple nudibranchs. With a keen eye you can see the white and black spotted Dalmatian nudibranchs, octopus, moray eels and if you’re lucky even a common sting ray!
Due to the unpredictably of weather and changing sea conditions scheduled dive sites may change on the day. This is at the discretion of our captain.

The cave of the black rock 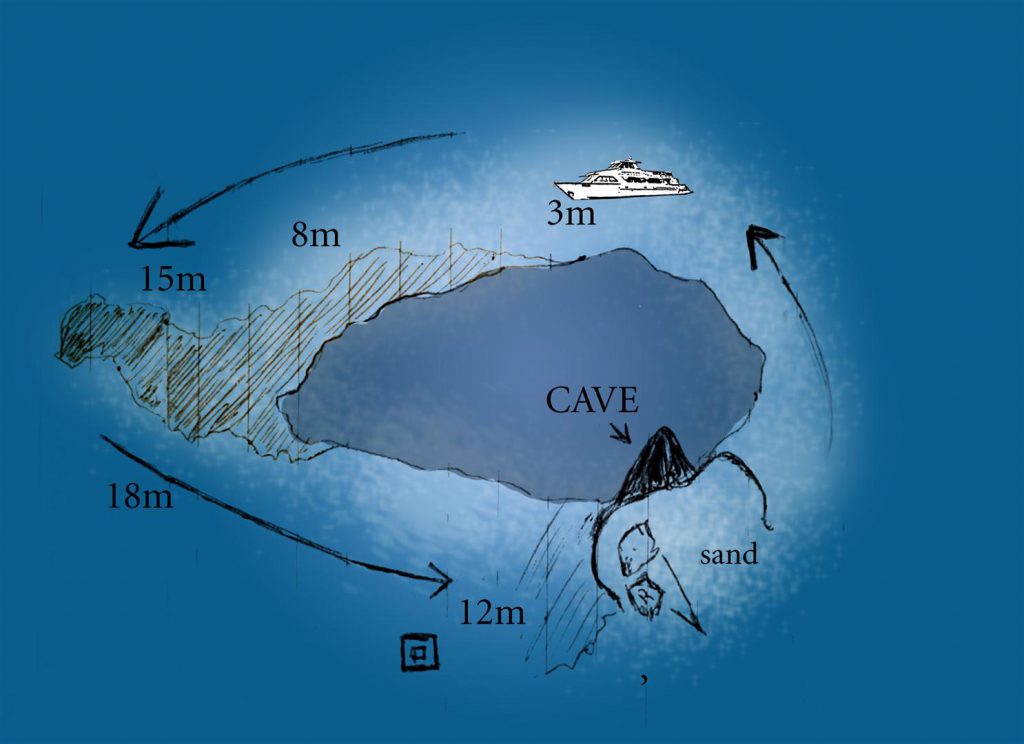 Situated just off the north east part of Pserimos. A truly fantastic dive featuring plateaus and drop offs! The dive is usually made circular navigating the island anticlockwise. In the first ten minutes of the dive you cross a ridge which leads down to the first drop off that starts at about 20 meters and drops down to around 50 meters looking out in the blue here it is possible to see schools of barracuda.
Cross another ridge that drops off and glide with the current along the plateau at a depth of 18 meters, schools of sea bream and the occasional red sea star.
Following the bottom contour up and around you will find yourself on a huge patch of sand surrounded by rock walls and a magnificent cave at about 8 meters deep.
The entrance to the cave is big! Around 7 meters high by about 5 meters wide.
The cave stretches back about 25 meters in length all the time tapering in and getting smaller the deeper into it you delve. The walls of the cave are covered in orange coral and different sponges. Here you are guaranteed to find scorpion fish hiding in the shadows.
Due to the unpredictably of weather and changing sea conditions scheduled dive sites may change on the day. This is at the discretion of our captain.