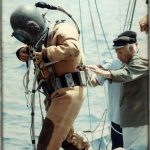 “When I’m diving I feel full and complete. In the sea, I believe that I can experience the path of life and in each drop I can see the past but also the future. When I am diving I feel like the Master of the Universe and at the same time so small like a tiny salt crystal. My life is in the sea and the sea is my life.”
–Pericles Liamis

Perikles Liamis, son of one of the oldest divers families in Greece, is the founder of “Liamis Dive Centre”.

Born in 1947 in Piraeus, he began his career as a commercial diver with traditional helmet at the age of 14, under his father’s supervision, who was an offshore commercial diver and company owner of floating cranes and tug vessels.

As soon as he turned 18, Perikles served in the military for 2 years, as a Navy SEAL, where he was trained in rebreathers and closed circuit devices.

Two years later, he attended training courses at the Greek federation of underwater activities and obtained the 3*CMAS award.

After his graduation, in 1970 he founded the first Official Diving School in Greece, opened a diving equipment retail and repair store and became a diving operations contractor.

In addition to that, he attended several diving equipment repair and maintenance seminars, under the instruction of Jacques Yves Cousteau at his company, “La Spirotechnique”.

In 1973, Perikles became the authorized dealer of “Scubapro” for Greece and continued his training in several diving companies as a repair technician for: regulators, tanks, gauges, air compressors and decompression chambers.

In 1975, he attended a diving training in Italy with TRIMIX and HeOx and performed one of the year’s deepest dives in the Mediterranean Sea at 137 meters using an open circuit device.

Moreover, he worked as a consultant and inspector for several Greek and foreign companies, among others for the Hellenic Register of Shipping and the Ministry of Mercantile Marine.

In 1980, he became an accredited fin swimming coach certified by the General Secretariat of Sports and built the diving boat “Apollon” at Perama shipyards.

With “Apollon”, Perikles contributed for 15 years to the Mediterranean Sea mapping, conducted by the Hellenic Centre for Marine Research.

He has also been the chairman of the Hellenic Instructors Association for 3 successive years.

From 1995 to 1997 Perikles worked as an instructor at the 2nd Public Commercial Diving School in Europe, located in Kalymnos.

He participated in several international documentaries, researches and presentations illustrating the diving history and evolution.

He is also a volunteer rescuer, organizes environmental protection days for ports and harbors waste control and the maritime ecosystem preservation.

Since 1995, Perikles is professionally engaged in scuba diving tourism and technical underwater operations.